Earlier in the week, thanks to the invitation of my wonderful friend Tommy, I got to see the Scorsese exhibit at the ACMI (Australian Centre for the Moving Image).

While I’ve seen a number of Scorsese films, I can’t say I’m an aficionado of his work – his name on a film won’t make me go out to see it.

What I do love are exhibitions that embody the intersections created between the past, museums and film: and the Scorsese exhibit had that in spades. As historian and Screened Historian I am intrigued by the ways such exhibits are developed and utilise moving images and static objects: letters, photographs, storyboards, costume designs, etc.

Perhaps because I am about to visit New York, the elements of the exhibit that dealt with the city captured my attention in a way they would not normally.

Yet the city of New York is a character in its own right many of Scorsese’s films, central to his life, as his personal photographs demonstrate. So it would be impossible to come away from the exhibit without feeling like it was, in many ways about Scorsese and New York.

So there was a strange intersection of Scorsese’s personal connection and mine going on which coloured my experience. Adding yet another layer, I turned 3 in New York city, in 1979. But enough about me ..

For historians the love-hate relationship with screened history seems to me to be intimately tied to its ability to recreate a sense of the past that is so engaging to the senses that the audience is literally transported back in time.

But such verisimilitude is a dangerous thing, as it is not real. It is illusory and historians have distrusted it, desired it and doubted it for nearly a century. It has been the written word with which the past has been brought back to life by those authorised to ‘speak’ about the past. But not longer.

New York, Scorsese’s New York, is recreated in the films and the artefacts on display. Side by side with personal photographs are clips from films and production artefacts from films like Mean Streets, Goodfellas, and The Gangs of New York. What these revealed was, despite the extraordinary degree of verisimilitude that films like these create, just how much the New York on screen is not real.

Whether recreated on sound stages from elaborate, meticulously researched set designs, or the rare use of intricately painted glass plates, providing historical backdrops for live action foreground: all is an illusion, a slight of hand. 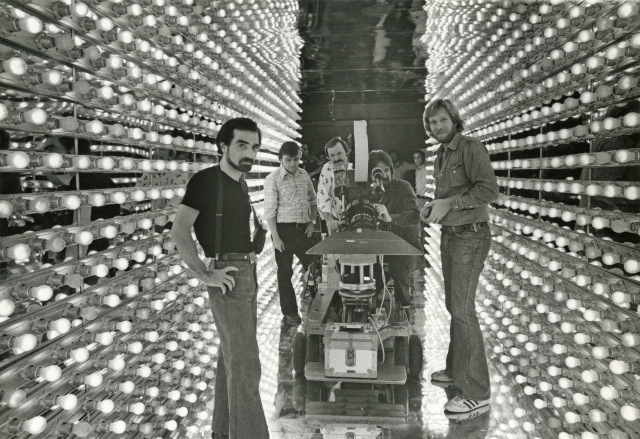 Yet, there is a magnificent, contradictory, tension at the heart of these illusions. In deliberately faking the past – be it 19th century New York or the New York of the 1950s and 1960s – it is done out of a complete and utter dedication to a very real past.

It is more than homage or mere backdrop. In Scorsese’s films it is memory, memorial, almost incantation. To quote Matuszewski, his film’s make “the dead and gone get up and walk”.

Even with all the tools of illusion on display, the sense of their history creates another layer of the past, which again places upon the viewer a sense of reality, of past and present existing simultaneously.

It is what makes for an excellent exhibition, and a perhaps a nervous historian. Or a nervous traditional historian. For only if we cling to old notions of how to represent the past, of who has the authority to ‘tell it’ and how to do so, can such an immersive and sensory experience be considered unsuccessful, or inappropriate history. Both the exhibit and the films it celebrate demonstrate the ways in which the past, when it is engages all the senses, really does bring the viewer back in time, and make the dead and gone, get up and walk.

I am currently working with Associate Professor and documentary filmmaker, Kim Nelson on a new interdisciplinary and international project.

Interview with Robert Rosenstone for the Film and History conference 2018 (from Kim Nelson on Vimeo).